Arista is the Third Princess, third young daughter of King Triton, and Ariel's third sister. She also becomes one of the Adventurers, serving as Light Girl aboard the Chimera.

Arista is the third daughter of King Triton. Growing up, she and Aquata had a sort of bickering relationship, due to Arista always taking her things without permission. This led to Arista having a sort of kleptomania sort of deal. Although in better retrospect, she and Ariel had the most argumentive relationship; this was due to her being jealous of Ariel's adventurous and brave personality.

She is vain, ironical, selfish yet kind and helps her sisters in need. She's actually a fun-loving, sweet and lovely blonde kleptomaniac who steals Aquata's personal things and argues with her every time. Though most of the time, she argues with Ariel, considering she's envious of her adventures. But that changes when she joins on them after the Giant incident.

At first and most of her life, she was afraid of humans due to the many rumors about them being fish-eaters, which would also lead to them eating merfolk. Though she is even more afraid of giants, due to the stories Ariel found and read, leading to something more terrifying for her to fear. She also didn't understand what her sister sees in a human like Eric, as aside from the vegetarian diet, he still seemed the same as any human. 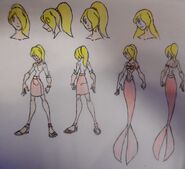 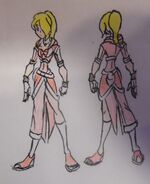 Retrieved from "https://akh.fandom.com/wiki/Arista?oldid=4413"
Community content is available under CC-BY-SA unless otherwise noted.