“He's very handsome...”
―Ariel after seeing Eric in six years, since they were both ten.

Eric Thatch is the main character, main male character, of the Aquatic Kingdom Hearts.  He is the Chosen One to bear the Seablade, the mythical Fourth Heart of the Sea, to bring Balance to the Three Hearts of the Sea.  Later on, he becomes the captain of the Chimera, as well as The Chimera Pirates.

Born to a family of explorers, Eric was completely encompassed in such a lifestyle. His head filled with stories from his grandfather, Thaddeus Thatch, ignited a passion of exploration within him. Even the places his parents took him when he was a child, China, Scotland, France, all to unearth ancient legends like the Mandarin, Mor'du the Demonic Bear, or even an ancient flower said to heal any illness, it all was adventurous and wondrous to the young boy. But no one ever believed in their family's tales or exploits, and this caused a wedge in the boy to doubt it all. Until that fateful day, when the Queen Anne's Revenge took his family, his mother and father, away.A terrible storm and a renegade pirate ship, blowing up the cruise ship taking him and his family home changed his life forever. Being blown off the ship, Eric near drowned that night, but was saved by a girl nonetheless. A girl, he learned the next morning, was a mermaid. That first meeting with the girl of his dreams and fantasies, changed the young Thatch's life forever.

From that day forward, he was forever enthralled in the myths and legends of the Merfolk, going as far as studying legends of Atlantis and other legends and historical facts surrounding them.Six years since that day, and young Eric grew up to be a young man instead of a young boy. And six years later, he would meet the same mermaid that saved his life, Ariel. Unfortunately, it was also that he would come face-to-face with Davy Jones, the immortal and tentacle-bearded captain of the infamous Flying Dutchman. Left to drown by Davy Jones, both he and Frey were almost left to die... if not for Ariel, who saves him again. While his friend was half-conscious, he and Ariel managed to catch up after six years, sparking more than friendship, unbeknownst by the two, but more known to Ariel.

A night later, after promising to meet each other again, Eric met up with Ariel again, this time with legs and missing her voice. After meeting with Dax, the little otter explains the situation with the Sea Witch, not bother telling him that it's his kiss that will save her.

Like most Disney Heroes, Eric is Heroic, handsome, and brave. He's determined to help others around him and not give up on anyone. He isn't one to run away from a fight, unless it's necessary and the battle becomes too much for them to finish in one day. Surprisingly, he's also pretty shy, but only when it comes to the girl that he loves. But with Ariel, he can be pretty romantic with her; able to sweep her off her feet with just a kiss or the right words.

Perhaps the biggest trait is his acceptance of different people or different races, learning that no nation was entirely good or bad, meaning that no one should not blame the people of the nation, but rather its ruler.  As well as whether if you're human or not, it doesn't mean you can't accept them for who they were.  A fact that brought him and Ariel together.

Although he is rather strong, he still finds it confusing that an ordinary guy like him is given such a destiny to weild a sword like the Seablade.  So at times, he doubts himself, but with a little help from others, he shoves them aside and knows who he really is.

had studied many of the living and dead languages around the world, making him a budding linguist at such a young age.

on the Flying Dutchman derelict as well as assisting his crew members in storms. Eric spends much of his free time out at sea, whether for fishing, exploration, or on a later mission to find his fourteen year old daughter, Melody. 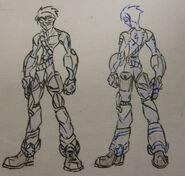 Retrieved from "https://akh.fandom.com/wiki/Eric_Thatch?oldid=4378"
Community content is available under CC-BY-SA unless otherwise noted.