Seifer Norrington is the son of Commodore Norrington, friend/rival of Eric Thatch, and the Bearer of the Seablade's equal, The Flameblade.

Write the second section of your page here.

“My dad may not have been the beginning of the Norrington bloodline, but I refuse to let him define it.”
―Seifer

Seifer appears as very brash, rude, and taunting. He signifies himself as the "protector of the town". His personality is more childish and a lot more brash. Although he often seems like a bully, he is shown to care about the town and is nice to Eric and the others when he sees fit.

Seifer is pessimistic, has a harsh attitude, is easily annoyed, and is prone to making rude and sarcastic remarks. His fiery temper is often set off by Frey's joking persona and also by spontaneous constant singing. Despite his negative outlook, Seifer is a hero at heart in the story, and is often the first to take action when villains cause mayhem throughout wherever they venture to. He also seems to be the most intelligent of the group, after Eric, and can easily be considered the toughest. Even so, he can be pretentious at times, overly suspicious, and his anger has, on occasion, landed the group into trouble.

Even as the unofficial protector of Port Royal, Seifer appears to be a generally disliked inhabit of Port Royal. This could explain his negative attitude and why he softens almost immediately whenever he's given even the slightest bit of compassion.

He also wants to ensure his family name is not remembered from just his father. 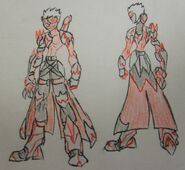 Retrieved from "https://akh.fandom.com/wiki/Seifer_Norrington?oldid=4376"
Community content is available under CC-BY-SA unless otherwise noted.